This is the ECG of an 83 yo woman who presents to the emergency department complaining of shortness of breath. 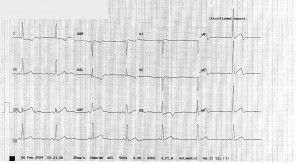 Yamaguchi cardiomyopathy  is a variant of hypertrophic cardiomyopathy that is nonobstructive with predominant involvement of the apex of the heart. It is also called the “oriental HOCM” as it is much more common in the East Asian population.

It is frequently misdiagnosed as ACS or STEMI as the typical ECG abnormalities include giant inverted T waves or ST elevation in the mid precordial leads, however coronaries are characteristically normal on cardiac angiography, but this reveals the pathognomonic “ace of spades” configuration of the left ventricle with systolic obliteration of the apical region.

Echocardiography may miss it either because the apex is not visualised or because the apical hypertrophy is taken for apical foreshortening. Diagnosis is usually made either by MRI or angiography.