Your patient is a 2 yo boy brought in by his mother after he choked on a peanut. This is his CXR. 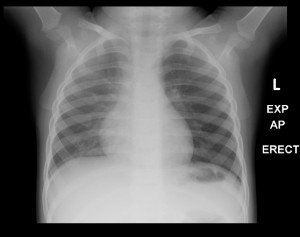 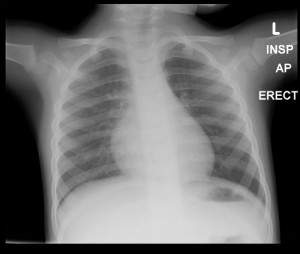 3 types of obstruction once object lodged in the airway:

The sensitivity of chest x-ray performed in the emergency department for foreign body aspiration was found to be only 22.6% with false-negative rates of 5% to 30% in children.
So a NORMAL chest Xray DOES NOT rule out an airway foreign body.

If there is clinical suspicion that the object might be lodged in the upper airway, a lateral soft tissue Xray of the neck might be helpful.

Children with suspected inhaled foreign body should NEVER be held down for imaging as this might dislodge it and cause complete obstruction.

Children who are in extremis should NEVER be sent to Radiology for imaging. Airway should be managed first, then they can have portable CXR, but this should not delay transfer to PMH for bronchoscopy by ENT or Respiratory medicine team.

Which children with suspected inhaled FB should be referred to the Respiratory team at PMH for bronchoscopy?

In “low risk” children who are discharged home from ED, parents should be advised to return to ED if the child has ongoing cough, noisy breathing or recurrent chest infections.

Coming back to our patient, there is air trapping on the left side suggestive of left main bronchus obstruction and no foreign body is visualised (only 20-23% of inhaled foreign bodies are radioopaque)!